Readers may recall past work on the site that compiled a database of local Irish women–the vast majority from Cork–who married First World War U.S. servicemen and began new lives across the Atlantic (you can see the database here). Working with the National Archives in Washington D.C., the Port of Cork and the Sirius Arts Centre in Cobh, I subsequently curated an exhibition featuring a number of these women’s passport images for the 100th anniversary of the U.S. arrival in 2017. That exhibition has since been on display in Cork City Library, and from late July will be in Midleton Library (where I will be giving a free public talk on the topic on Saturday 21st July at 12.15pm). Due to the nature of the sources, we could uncover only fragments of the lives of these women after they went to live in America. I have been fortunate since first making the research available to be contacted by a number of their descendants, who have greatly increased our knowledge of the later lives of the Irish “War Brides.” Among them were Eve and Bob Pranis, the grandchildren of one of the women– Alice Maud Pain from Cork City. I was delighted to recently meet Eve and Bob when they visited from America, and show them around some of the sites associated with their grandparents. Eve kindly agreed to share some recollections of her Cork grandmother and her experiences with us, and these are reproduced below. 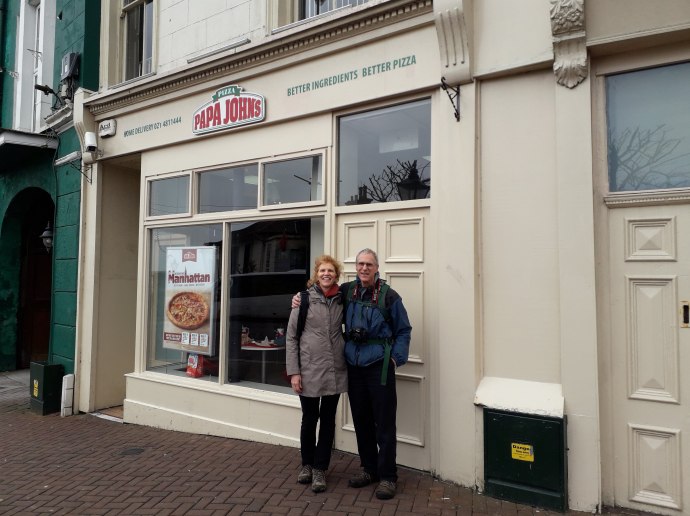 To provide some background, Alice married U.S. Navy man Joseph Pranis in Cork in 1917, where Eve and Bob’s father, Jospeh Junior, was born to the couple on 17th October 1918. In 1919 Alice applied for a passport to go an live with her new husband in America, including as her passport photograph and image of her, her baby son and the family dog at their house at 5 Langford Terrace in the City (one of the images featured in the exhibition). But what happened next? Eve takes up the story. 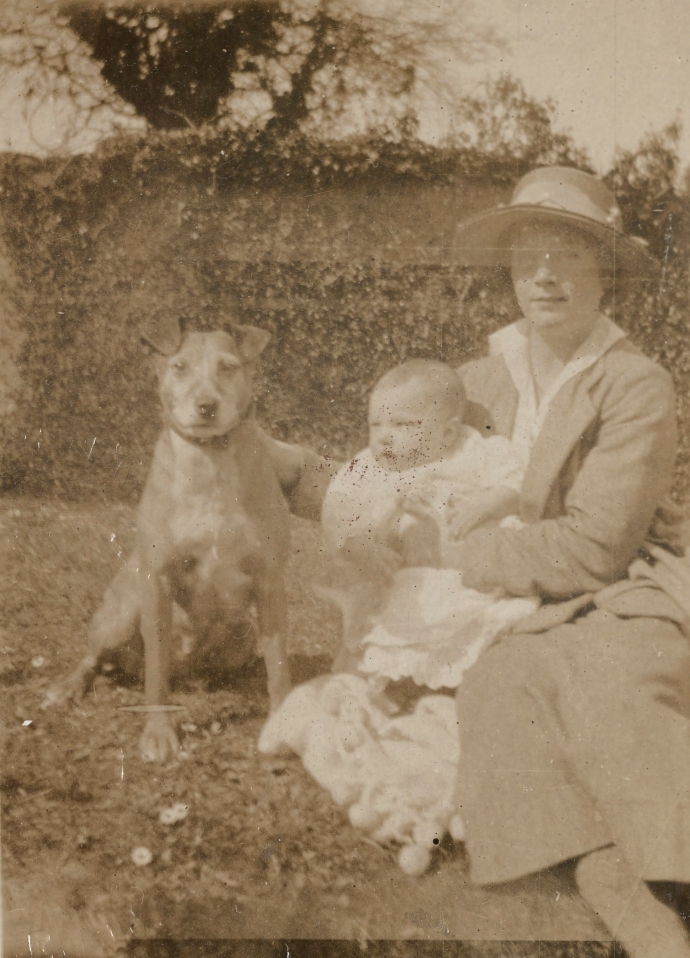 The passport photo that Alice Maud Pranis submitted with her passport application. Taken in her parent’s back garden in Cork City, with her new son Joseph (Eve and Bob’s dad) and the family dog (National Archives)

My grandmother Alice’s parents were James Arthur Pain who lived to age 76 and Susan Clarke who lived to 83. Alice told us that her father, James Arthur Pain, who was born in Cork, was a protestant who preferred that she didn’t play with the Catholic children. Her mother, Susan Clarke, was a bit more broad-minded. Alice married my grandfather, Lithuanian-American, Joseph Pranis, in Cobh in 1917 when he was stationed with the U.S. Navy. Joseph stayed in the Navy after Alice went to America, and each of Alice’s children were born in a different country or city depending on where her husband was stationed.

A family photo of Alice and her siblings (partially colourised) taken in Cork during the early twentieth century, and which remains in the family (Pranis Family)

Alice’s eldest son, my father, was born Joseph Arthur Porter Pranis in Cork in 1918. (He passed away in 1995.) Note, the second middle name Porter was selected by Alice’s husband, Joseph, because he was stationed on the USS Porter, a US destroyer that was based in Cork. When the family was later stationed in the Phillipine Islands, my father was introduced to the library by a serviceman, and he learned to love reading. His dad wanted to “make him a man,” but he didn’t want to consider the service. Hence, he dropped the name Porter. He remained a Pacifist, making an exception for WWII.

Alice talked – not wistfully – about being put on a “coal boat” along with baby Joseph after arriving in New York in 1919. That took them to Cleveland to stay with Alice’s husband’s “big, boisterous, non-English speaking family.” Alice was evidently not treated very warmly by her in laws. She recalled, however, that on her arrival in Cleveland, she met a Black woman named Effie who took grandma under her wing and helped orient her. They remained friends and grandma eventually named her daughter Elizabeth Effie Pranis. 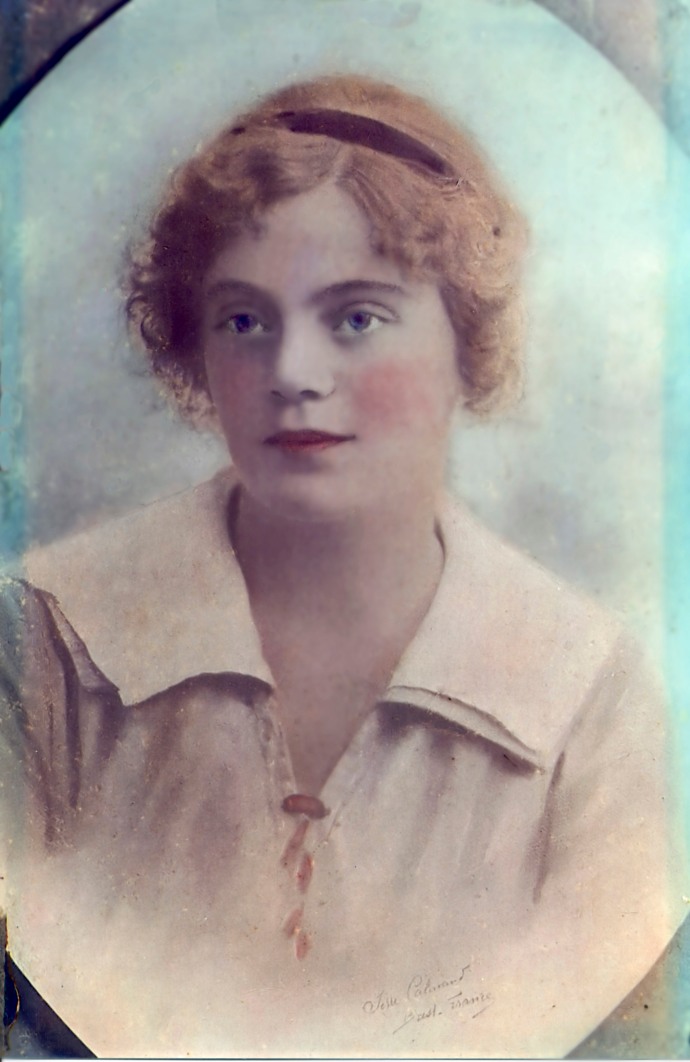 Alice traveled, moved to and lived in a great many places, sometimes on short notice. Being married to a navy man meant frequent moves. After her stay in Cleveland, the family moved to Newport, Rhode Island, where her daughter Elizabeth was born in 1921. By 1926, they were in the Philippine Islands where her son Robert was born. By 1928, she boarded a ship in China with her children in tow and landed in San Diego, California. At age 42, Alice had her fourth child Mildred, who was born with fairly serious cerebral palsy. (Before settling for good in San Diego, the family had one more stint in Norfolk, Virginia.)

By the time Mildred was coming of age, Alice’s other children were out of the house. She was determined to keep Milly, who was very bright, but spastic and wheelchair bound, as active and engaged in life as she could. This included going to the enormous San Diego zoo, museums, summer camps, and theaters; traveling with her annually to Spain (where the climate agreed with Milly); and getting her a typewriter so she could correspond with “pen pals” around the world. Alice was a very tiny but strong woman who did most of the physically demanding work to keep Milly active. She lifted her out of her wheelchair and into tubs for decades. As they traveled, the two collected dolls from around the world. Alice and her husband chose to stay in San Diego because the school system had good programs for children with special needs.

We didn’t see as much of our grandmother Alice as we would have liked. We lived in New York State and our grandparents remained in San Diego, which is 3,000 miles away in Southern California. Travel was expensive then for our working-class family. But my brothers and I, along with cousins, have some vivid memories of our visits back and forth.

Alice had a delightful personality and a fairly bright outlook on life. She was never one to hold grudges and had a “live and let live” attitude. All this despite having to pack up home and children and move countless times — and having a husband who was a bit of an authoritarian (and drinker) who spent much time with his retired Navy buddies. Her memory was also fantastic. Twenty-five years after taking her the 12 miles from her house to Tijuana, Mexico for lunch, I asked if she recalled our outing. “Oh, wasn’t that a delicious fish dinner,” Alice accurately recalled at age 99. 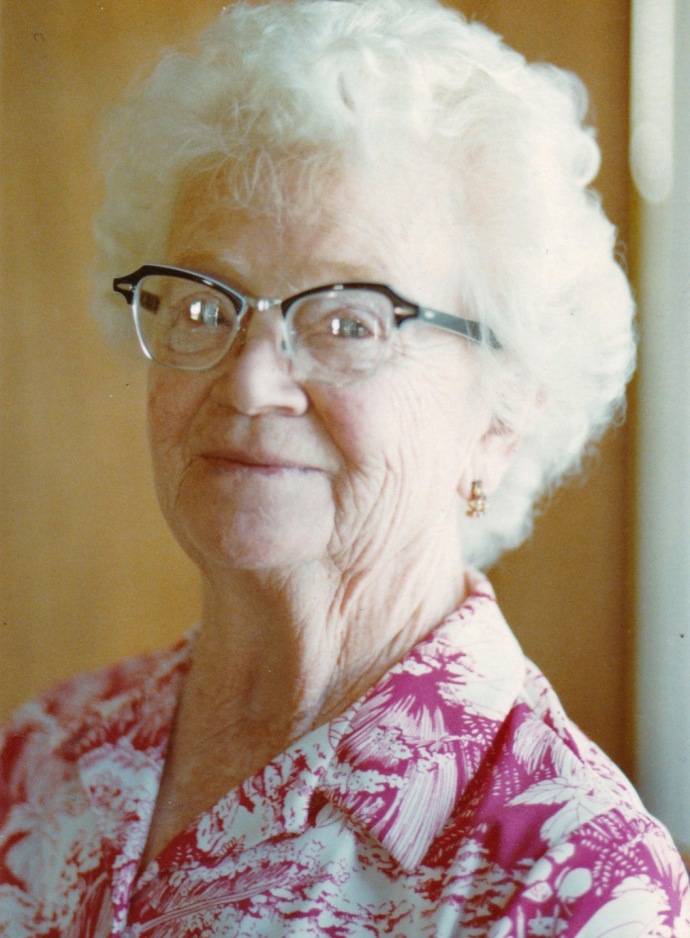 Alice was a strong and active walker. She and I spent hours walking around the San Diego zoo. She walked to church every day until she was in her mid-80s – and had knee surgery in her 90s.

Although Alice was an American citizen in many ways, she retained her sweet Cork lilt until she passed away at nearly 104. (She explained that her longevity was due to never eating salty snacks. That said, she loved eating Kentucky Fried Chicken on her birthdays and other special events.) She made a mean Irish stew, celebrated St. Patrick’s Day, and kept loads of photos of her life in Cork. Sadly, most of the latter were destroyed by her husband when he had dementia, which she took in stride. After her husband passed away (26 years before she did), she returned to Ireland several times with her daughter Elizabeth. Word has it that Alice met an Irish gentleman in a bar with whom she had a long correspondence.

I would like to thank Eve and Bob for sharing these recollections of their Grandmother with us. Hers was a life forever altered by the arrival of the Americans in Cork Harbour in 1917, and it is magnificent to have a flavour of where that life took her in the many decades that followed her departure. If you are a descendant of any of the War Brides identified in the database (or indeed of any First World War American War Bride from Ireland) and would like to share their story with us, please email me at irishamericancivilwar@gmail.com).