In Search of Rostellan Castle, Part 1: Sieges, Parties & Regicides in the 16th and 17th Centuries

As a resident of Farsid, I am fortunate during our current lockdown to have Rostellan Woods within my 2km exercise area. I have written about aspects of Rostellan on the site before (see e.g. Cork’s Workhouse Children Visit Rostellan 1866-7), but I thought I would take the opportunity the crisis presents to do a series of posts that explore the history and surviving archaeological landscape of Rostellan Castle, Demesne, and Gardens. Though most of us are familiar with the woods and the Aghada GAA pitches, the fascinating history behind this location is less widely known. I hope through these posts to share some of the available information about this location’s past, and also to raise awareness of the need to take action to preserve some of surviving fragments of this landscape, which are currently degrading at an alarming rate. This first post looks at the early castle of Rostellan, and its story in the 16th and 17th centuries.

The Fitzgeralds of Rostellan Castle

While it is probable that a medieval fortification was sited at Rostellan, it is in the 16th century that Rostellan Castle begins to make regular appearances in the historical record. In 1565 the land here passed into the hands of the FitzGeralds, an event recorded in the Patent Rolls of the High Court of Chancery:

…whereby Gerald Fitz-James McSleyney, captain of his nation in the cantred of Imokilly, and proprietor and true lord of Rostelan and Culbaine, for a certain sum of money, sold and conveyed to John Fitz-Edmond James de Geraldinis, gentleman, Cork County, his manor of Rostelan, containing 1 carucate or plowland, and a particle of land of Culbaine, with its wood…

According to R.G. Fitzgerald-Uniacke, John Fitzedmond was around 37-years-old when he acquired Rostellan in 1565. He was married to a daughter of the O’Brien Earl of Thomond, a family who would become intrinsically linked with Rostellan over the next 300 years. Rostellan was just one of John’s possessions, which he seems to have increased as he successfully navigated the Desmond Rebellions which devastated Munster. Apparently a loyal-Crown man, he was rewarded for his support of Elizabeth I with a knighthood at Cloyne in 1601. By then he had passed Rostellan Castle over to his third-son, Thomas FitzJohn Gerald, who seems to have been resident there. Thomas had become the formal owner in 1594, when he obtained “The manor and castle of Rostiellane, and all the lands, tenement, and hereditaments of Ballynamony, Cruoghane, Kayall, Cwylbane, Moynivorrin, Ballynyclassy, Ballygoyre, Ballyncattanaige, and Ballynvollin, in the territory of Rostiellane [and] Ballyknoick and Collraghe in the territory of Doungvornay” from his father. The Rostellan Peninsula in the 1650s (left) and today (right). The Down Survey mapping demonstrates that the early castle was certainly on the same site as the later 18th-century house. Most of the landscape changes owe their origins to undertakings in the 1700s, as will be explored in a subsequent post (Trinity College Dublin Down Survey Project/National Library of Ireland/Google Maps)

Whatever about his father’s relationship with the Crown, Thomas (perhaps as part of a family strategy) was one of those who hedged his bets during the Nine Years War (1594-1603). When Munster was ablaze in the late 1590s he seems to have taken Rostellan into rebellion, as “Thomas fitz John Fitz Edmond of Rostellan” is among a list of men who were pardoned by the Crown in 1600. Seemingly none the worse for his flirtation with Hugh O’Neill, by 1606 Thomas had been granted a licence to hold a Saturday market at Rostellan by the new monarch, James I. Thomas passed away in 1628, leaving Rostellan Castle in the hands of his son, James Fitz Gerald. When he died in turn seven years later, he left behind no children. The lack of a surviving male heir meant that the interests of most of his lands fell to Fitz Gerald relatives, who controlled the bulk of the locality. However, his widow, Mary Burke Fitz Gerald, was permitted to maintain her living at the 252 acre Rostellan Estate. According to Fitzgerald-Uniacke, Mary later wed another of the Fitz Geralds, Richard, who was son and heir of Edmond Fitz Gerald of Ballymartyr (now Castlemartyr). This was the state of play when war came knocking at Rostellan in the 1640s.

The most dramatic incident in Rostellan Castle’s history came in the midst of the Eleven Years War (1641-1653). Richard Fitz Gerald apparently served as a Royalist officer during the conflict, and the castle of Rostellan followed his allegiances. It was 1645 when the war landed on Rostellan’s doorstep. The man who set his sights on it was Murrogh O’Brien, Lord Inchiquin. In this complex war that was characterised by shifting allegiances and an often dizzying array of competing military forces, Inchiquin, formerly a Royalist, was now in the service of Parliament. He would become known to history as Murchadh na dTóiteán [Murrogh of the Conflagrations/Murrogh the Burner]. As a mark of the castle’s strategic importance on the eastern side of Cork Harbour, that summer Inchiquin’s forces invested the castle and prepared artillery positions in order to bombard it into submission. Rostellan promptly surrendered, and the campaign moved on. Lord Inchiquin would soon be developing a long-term association with Rostellan, but in 1645, his men’s stay would prove brief. 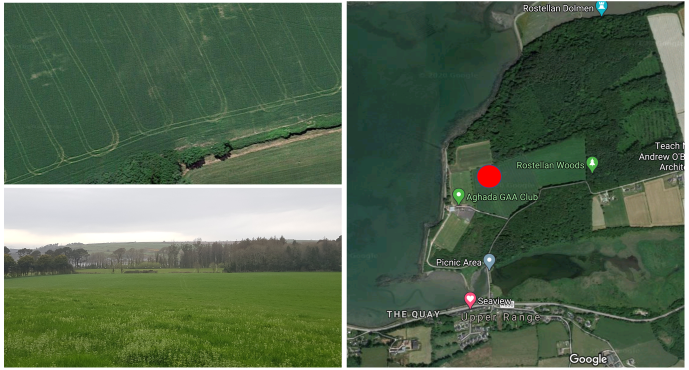 The location where Rostellan Castle stood in the 16th and 17th centuries. Top Left: The cropmarks of the site, largely related to the 18th century house, remain clearly visible. Bottom Left: The view from the entrance to Aghada GAA, looking directly at where the castle once stood. Right: The location of the 16th and 17th century Rostellan Castle and later house, marked with a red circle (Damian Shiels/ Google Maps)

The main opposition to Inchiquin in East Cork in 1645 were the Confederate forces under James Tuchet, 3rd Earl of Castlehaven. While encamped at Castlemartyr–which had recently been taken and burned by Inchiquin–Castlehaven hatched a plot to take Rostellan back, an operation he described some years later:

I got intelligence that Colonel Henry O’Brien (brother to the lord Inchiquin), and Lieutenant-Colonel Courtney, with several other officers, were come by boat to Rostellan, to make merry; that the tide falling, their boats were aground, and so would continue till high-water. On the certainty of this I lost no time, but sent immediately a party to seize the boats, lying more than a musket shot from the castle, following as fast as I could with the army; which being come up, I presently fell to the work planted my guns on the batteries made by my lord Inchiquin, not yet destroyed, and in the morning the place yielded on discretion.

A Regicide at Rostellan?

Despite this reverse, it wouldn’t be long before Inchiquin and his family were back at Rostellan. Antiquarians state that the property was officially granted to Inchiquin in 1648, a property title that would endure into the 1850s. However, in the short-term, the Cromwellian conquest of Ireland and the victory of Parliament forced Inchiquin–who was once more in Royal service–to flee to France. Afterwards the lands at Rostellan were recorded as part of the 1650s Down Survey, the major surveying and mapping project initiated to aid the transfer of land from Irish Catholics into the hands of those who had supported Parliament. It lists that the lands of Rostellan were still held by “Richard Fitzgarrald in right of his wife”. The Survey includes a fantastic early description of Rostellan:

What became of Rostellan Castle during the 1650s? With Inchiquin and Fitz Gerald out of the picture, it was at this juncture that another individual enters the story of Rostellan–Irishman Robert Phayre. Lieutenant-Colonel Phayre (sometimes Phaire) had previously served under Inchiquin, but subsequently commanded a regiment under Cromwell during the conquest. He had a particularly notable claim to fame, for Robert Phayre was classified as a regicide. The Irish officer had found himself in England in 1649 when the warrant ordering the execution of Charles I was issued, and his position meant that he was one of the officers to whom it was officially addressed. Given a role in Munster under the Commonwealth, according to Sidney Lee’s 1909 Dictionary of National Biography he “retired to Rostellan Castle” in the mid-1650s. W.H. Welply recorded that Phayre leased the four ploughlands of Rostellan in 1653-4, and that he was given permission to cut 100 trees for the building of a dwellinghouse and out-offices there. He later moved to Grange near Ovens, and was arrested in Cork following the 1660 Restoration of the monarchy. Luckily for him, his 1649 refusal to sign the execution warrant meant his life was spared. He died in Grange in 1682.

The Death Warrant of Charles I. Robert Phayre, an Irish Parliamentarian Officer who appears to have lived in Rostellan Castle in the mid-1650s, was one of the men to whom it was addressed (Parliamentary Archives)

The Restoration brought with it the return of Inchiquin, who was now an Earl. A future post will look at the story of his family’s development of Rostellan Castle, a period when much of the landscape that still exists came into being. But there is a postscript to the story of 16th and 17th century Rostellan worth noting here. Though the 18th century would see this once defensive landscape transformed into a famous house and gardens, vestiges of its strategic past survived. In his 1861 History of the County and City of Cork, the Reverend C.B. Gibson recorded that within the part of the gardens known as the battery (which we will discuss in a later post) there were four brass artillery pieces. One was inscribed “ASSUERUS KOSTER ME FECIT AMSTELREDAM, AO. 1646” [Assuerus Koster Made Me, Amsterdam, 1646]. The other three were dated to 1786, and were likely placed there during the Napoleonic threat. As an aside, by then 19th century Rostellan Castle had also become the home of another interesting military artefact, a rare Scottish claymore sword of 16th century date that was later described by the National Museum of Ireland. Whether it had any ties to the Castle, or was simply a later purchase by the O’Briens, remains unknown, though it does at some point appear to have been associated by its owners with Brian Boru.