As this year is the 200th anniversary of Waterloo, our previous post looked at some Midleton men who served during the Peninsular War and at Waterloo. One of the reasons that many locals enlisted was the fact that they had a military barracks on their doorstep. During the Napoleonic Wars Midleton was teeming with soldiers of different nationalities, many stopping off on their way to and from the Iberian Peninsula where they were taking on French forces. We are very fortunate that the building these men were housed in still survives today- and forms a key part of what is now the Jameson Distillery. We have spent some time looking into the history of this Barracks, and some of the very interesting units that spent time there.

The Barracks in Midleton with later attached waterwheel http://www.geograph.org.uk/profile/34083

The barrack building within the Midleton complex did not spend long in army use. In fact it had already become a distillery by 1825, when it was purchased by the Murphy Family. It still forms a major part of the Jameson Experience tour, where visitors can view the impressive cast-iron waterwheel that dates to 1852. Neither did this building start life as a purpose-built army structure. It was constructed in 1793 to serve as a woollen mill, run by the Lynch family. With the renewed outbreak of war with France in 1803, and the army’s need for more accommodation around Cork Harbour, the mill was sold to the military. So began its brief but fascinating life as a military barracks. Remarkably, during the course of research, we discovered the original advertisement for the sale of the equipment from the Mill building, which you can see below. (1) 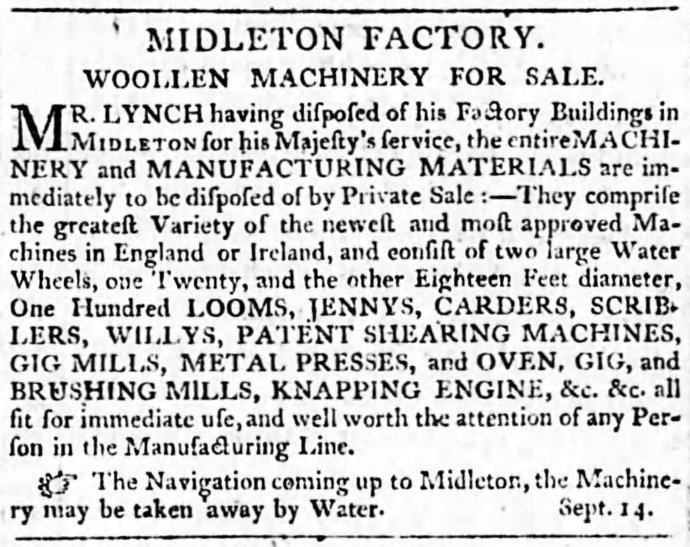 The Advertisement in the Cork Mercantile Chronicle of September 21st 1803, announcing the sale of Lynch’s Equipment

We were interested in exploring just who served in Midleton during the conflict. In order to ascertain this with some degree of surety it would become necessary to travel to archives in locations such as the Public Record Office in Kew, to extract details concerning the British garrison in Ireland. This is (unfortunately!) currently beyond the scope of the project, but as an alternative we took to contemporary newspapers and a number of online sources to see if we could discover references to the types of troops stationed in the town. Although newspaper accounts have to be treated with caution, they nonetheless do give us an insight into the important military hub that Midleton became during this period. Indeed the first references to troops we come across relate to increased militarisation as a result of the 1798 Rebellion. To give a flavour of this information, we have created a table which chronologically lists the references we have uncovered: 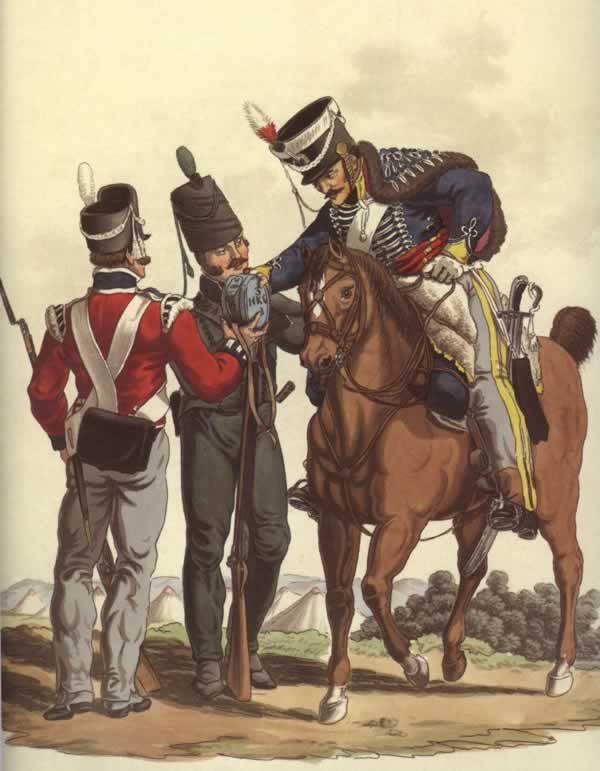 Members of the King’s German Legion, who were in Midleton in 1806, by Charles Hamilton Smith

Some of the men station in Midleton even left an account of their views on the barracks and the town. Lieutenant Francis Simcoe of the 27th Regiment recorded in 1808 that ‘Middleton Barracks are much larger & handsomer than Enniskillen, the town very small & neat about 7 m. from Kilworth.’ (24)

The Totenkopf badge of the Brunswickers (Wikipedia)

Two of the units that stand out among those we know to have been quartered in Midleton are the Hanoverian Rifle Corps in 1806 and the Brunswick Corps of the Duke of Brunswick Oels in 1810. The Hanoverian Rifle Corps (who are the same unit as the ‘German units’ in the previous table entry) were better known as the King’s German Legion, an expatriate force of Germans who fought throughout the Napoleonic Wars and at Waterloo. The Brunswick men had fought in Germany from where they had fled in 1809, and were known as the ‘Black Brunswickers‘. They were passing through on their way to service in the Peninsula and ultimately Waterloo. Many of the other regiments of foot would later develop names that are familiar to us today- the 71st Foot were known as the Highland Regiment, while the 50th Regiment of Foot would become known as the ‘Queen’s Own’ later in the 19th century.

Brunswick Infantry in Action at Quatre Bras, 1815 by Richard Knötel

It is interesting to note that troops used Midleton as a staging area while heading to or returning from theatres such as the Peninsula. Also of note is that a number embarked from East Ferry; one can imagine the bustling route from Midleton to the Ferry, via the busy port at Ballinacurra- surely quite a sight during the Napoleonic Wars. This quick newspaper review offers us just a glimpse of the hidden history of the brief period when Midleton served as an important military base. There is little doubt that many other units were stationed here during this period, and that much historical detail remains to be uncovered. We hope to carry out more much more work on this in the future, and in the meantime would like to hear from any readers who can add to the story of Midleton’s Napoleonic Barracks. Although, as the table shows, military units would continue to use Midleton both before and after the Napoleonic Wars, the town would never again see the cosmopolitan military traffic that it grew accustomed to during the wars with France. Shortly after Napoleon’s final defeat at Waterloo, the British Army sought to reduce the number of barracks it held around the country. Although there is some evidence to suggest they may have initially considered keeping Midleton, ultimately it appears they decided to offload it, as the advertisement below suggests. By the 1820s it would become part of a new story, one that it still shares with locals and tourists alike today, as part of what would ultimately become one of the world’s major whiskey distilleries. 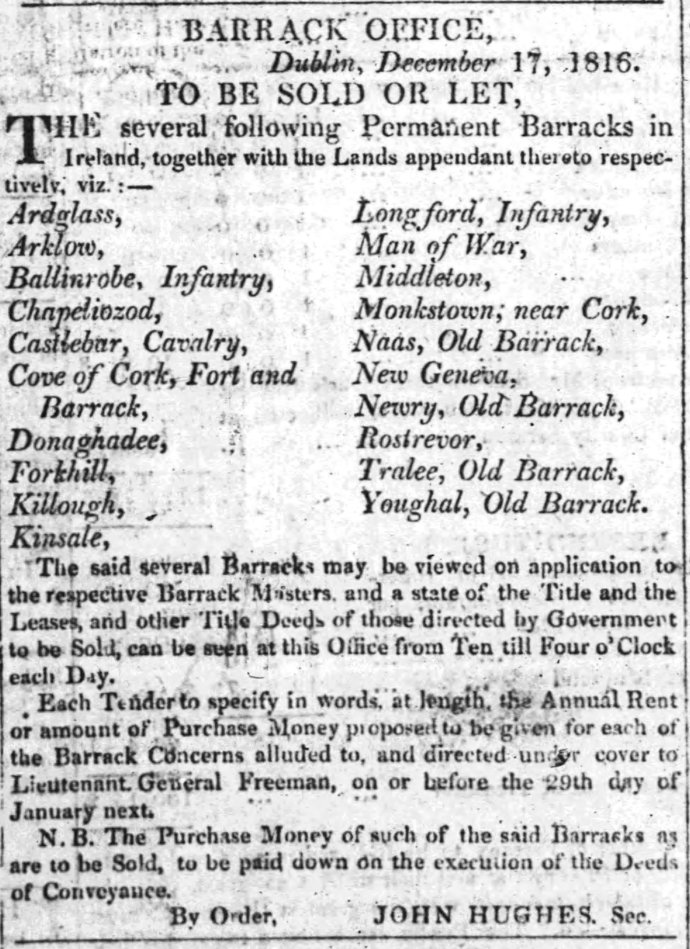 The Freemans Journal ad of 24th December 1816, which lists the intended sale of Midleton Barracks