Yesterday marked the 100th anniversary of the founding of Cumann na mBan, a women’s nationalist organization founded  to ‘advance the cause of Irish liberty.’ We here at Rubicon Heritage thought it would be a good time to share a table we have been working on that lists the Midleton members of the organisation in 1921 and 1922. We have had Sorcha Corcoran diligently making her way through the Cumann na mBan nominal rolls for the area, transcribing the names of all those who were remembered as being in the organisation. This includes those from places such as Aghada, Carrigtwohill, Churchtown and Cobh, which we will share on the site in the near future. These rolls are part of the treasure trove of primary material to be found on the Military Archives website. The rolls are handwritten documents that chart the membership in different areas on the 11th July 1921 (pre-Truce service) and on 1st July 1922 (post-Truce service). They are based on the recollection of a number of local Cumann na mBan officers, so the amount of details provided on individuals can differ depending on memory. Cumann na mBan members became eligible for pensions from 1934 and it was for this reason that these lists were drawn up- the majority were compiled in 1935.

The Midleton Branch of Cumann na mBan came under the jurisdiction of the Midleton District Council, 4th battalion, Cork No. 1 Brigade Area. Aside from Midleton there were also branches in Cobh, Carrigtwohill, Aghada, Churchtown and Cloyne who came under this umbrella. The President of Midleton Distict Council in both 1921 and 1922 was Anna O’Keeffe of Ardraha, who had passed away by the time of the pensions in the 1930. The Adjutant/Secretary of the District Council (again in both 1921 and 1922) was Peg Harty of Churchtown, who subsequently emigrated to America. No Treasurer was recorded for the district, as it was said they had ‘no money.’

Below are the two lists for the Midleton Branch for 11th July 1921 and 1st July 1922. Columns have been created to record name, maiden name, role, where they lived (if recorded) and any notes (e.g. death, emigration). If you would like to see the original handwritten lists, you can do so here. Do you have any ancestors who are among the women listed? 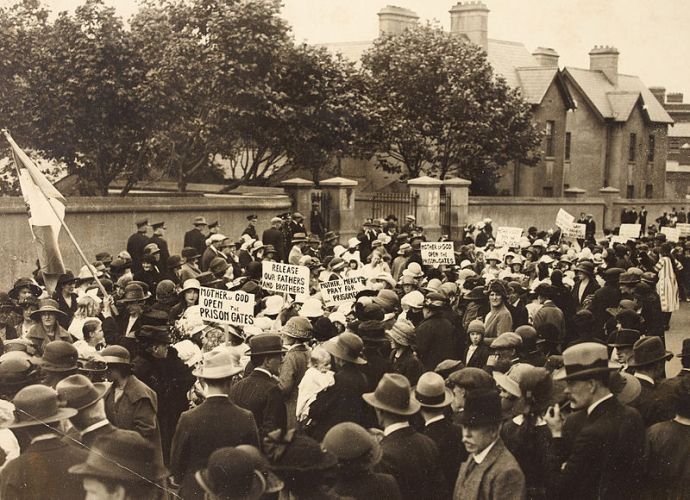 *Special thanks are due to Sorcha Corcoran, who compiled this data from the original lists.

Membership rolls for Cumann na mBan contain the ranks of officers, the names, postal addresses and maiden names where applicable of the membership at District, Branch and Squad level with the strengths on 11 July 1921 and 1 July 1922. Rolls are signed and dated by the Officers concerned. Deceased members are named and location of surviving members, if abroad, given. – See more at: http://www.militaryarchives.ie/collections/online-collections/military-service-pensions-collection/search-the-collection/organisation-and-membership/cumann-na-mban-series#sthash.QTeNcor6.dpuf