Who Lived on Midleton’s Main Street in 1901?

We decided to have a look at the 1901 Census to see who was living along Midleton’s Main Street in 1901. Our Transition Year student Rob Mitchell took up the challenge, and picked out some of the well known businesses on the street today to see what was going there over 100 years ago. The results are fascinating- read on to find out about the Australian, Tasmanian and Americans living on Main Street, as well as the ‘Fowl Fanciers’ and ‘Fancy Tobacconists’ who worked there. From new born baby’s to immigrant German jewellers, there was a lot happening on the Main Street in 1901. Rob takes up the story:

I have researched the buildings and inhabitants of the Main Street of Midleton from this era and compared this to the present day. Many of the buildings remain largely intact and unchanged. Some questions addressed are;

Who lived in the buildings of the Main Street?

What was the function of the building?

Is there any connection to today’s tenants?

I have selected some of the findings and detailed them below. 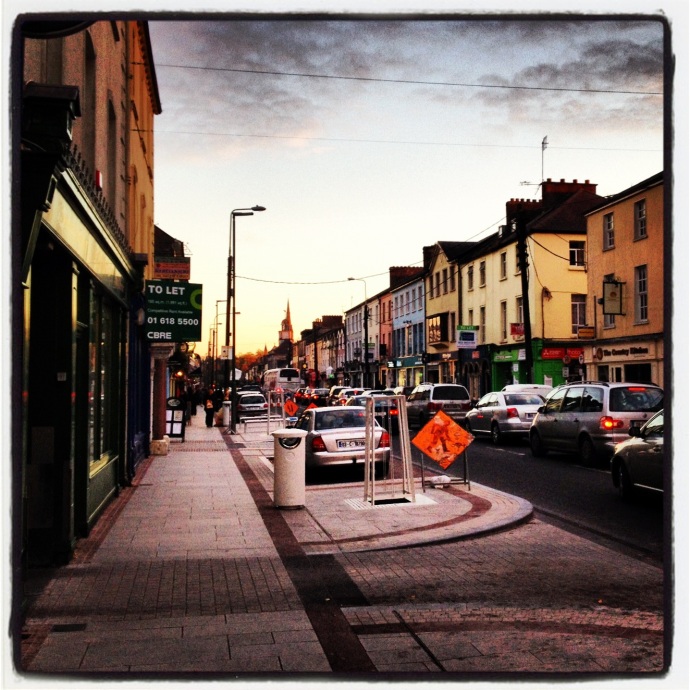 This is presently one of the most popular pubs in Midleton. 112 years ago an old shop keeper named Mary Ann Blansfield (80) who sold provisions, along with her daughter Mary Margaret Blansfield (44). The same architect who designed the Palace of Westminster, A.W. Pugin also designed McDaid’s in 1852 at the request from Lord Midleton. Originally designed as two buildings, by 1901 it had become one.

As this was once two buildings it was home to two separate families. In No. 26 lived the Barrys. Head of the family was Patrick Barry (49). a shop keeper who lived with his Limerick-born wife Johanna (50). He also had three apprentices- Bridget Barry (16), Kate Colbert (23) and Katie Draddy 16), one servant- Ellie Gearey (18) and one boarder, shoemaker Patrick Lane (23). No.27 was home to a small collection of the Daltons. Robert Richard Dalton (58), born in Derry, was a baker by trade. He lived with his wife Annie (57) and his daughter Queenie (17) who was a scholar.

This was lived in by the Kelleher family. John Kelleher (58) was an accountant in the distillery, his wife Bridget Kelleher (56) was a vintner. They had two daughters Josephine (21) and Mary Ellen (15).

Today the site of another popular pub, in 1901 it was home to Richard Fitzgerald (56) a shopkeeper and draper who was the Head of the Family and led a very large household.. Also in residence were his wife Ellen (46), his brother and business-partner Michael (50), children Norah (13), Michael (15) and William (5) (all scholars) and brother and sister-in-law William Walsh (39) and Kate Fitzgerald (43). They had two servants, Hannah Higgins (24) and Kate Keeffe (16) as well as five boarders- Shop Assistant Michael Desmond (27), Dress-Maker Norah Higgins (26), Milliner Margaret Power (26) and Apprentices William Lane (15) and Michael Manning (15).

This was the home of William Deasy (33) who was a tailor and his wife Mary (33). Also present was Timothy Riordan (17) who doubled up as their servant and as a second tailor. They had three sons, Thomas (3), Francis (1) and William who had not yet reached a year old.

Victualler and vintner Daniel Gilmartin (32) was the head of the family here, with his wife Katie (34) from Kilkenny running the business with him. They had four children, Christopher (6), Erin (5), Bartholomew (3) and May who was under one. Daniel’s 21-year-old nephew Michael Allen also resided there as a butcher, as did a servant/butcher Michael Spillane, also 21. The family also had a waiting maid, Lizzie Dunlea (28) and a cook Bridget Burke (24).

It is interesting to note that at the time of the 1901 Census two German brothers had taken rooms in No.28 Main Street. These were Albert (30) and Edward (25)- both were jewellers by trade and were surely the originators of the family and shop which retains a presence in Midleton over a century later.

Some of the more unusual residents of the Main Street resided in this house in 1901. Richard Walton Long (41) was the head of the family, He was a physician and surgeon and must have been an important man in the town. His wife Maria Long was 30-years-old and was described as a ‘Fowl Fancier.’ In addition she had been born a long way from Midleton- she came originally from Tasmania. They had a three-year-old daughter Iris Maria Walton Long. Also in the house was 27-year-old Marian Lilla Clockie, from Australia. The family clearly had strong connections to the other side of the World. Sisters Elizabeth Deacon (a 27-year-old nurse) and Edith Deacon (a 26-year-old scholar) were visiting on the night of the census. Another nurse, Mary Jugh (26) lived in the house with domestic servants Minnie Curtin (29) and Kate McCarthy (28).
The Maple Bar, 5 Main Street, Midleton

This building has been a pub for more than one hundred years as in 1901 this was owned by licensed publican John P. Barry (45) who was originally from Whitegate. He lived with his wife Marie (36), a native of Ballinacurra, and their five children James (10)  Louise (8), Lillie (5),  Margaritte (3) and ‘Ez O C’ who was only two days old. The family had recently returned from living in America, as eldest three children had had been born there, Also in residence were two domestic servants- Hannah Meade, an 18-year-old domestic servant from Ballincurrig, and Elizabeth Riordan, a 16-year-old from Thomas Street in the town.

This was occupied by May O’Keeffe (66), a widow who ran a grocery shop from here. Working with her were her son Eugene (40) and his wife Hannah (33). They also had a domestic servant, 18-year-old Hannah Brien who lived with them.

In 1901 Denis Desmond (52), who worked as an accountant at the distillery but also had a business as a ‘Fancy Tobacconist’. He lived with his wife Christine (51), who was from the city, and their 24 year-old daughter Ellen, a shop-keeper, and their son Michael (19) who was a medical student. Denis’s older brother James (60) who had been a mariner and was an invalid.

In 1901 this was occupied by the Fishbournes. This family is interesting in that they were all born outside Cork. John G (45) was the head of the family and was a bank agent born in Carlow, His wife Sarah (40) was born in Co. Kildare, It seems likely that John had travelled around the country working with the bank, as the couple’s daughter Dorah (10) had been born in Laois (Queen’s County) and their son Derrick (4) in Waterford City. They employed a 25-year-old governess, Mable Shaw, who was born in Dublin. The family cook, Hannah Holsour (21) was from Co. Kilkenny; their house maid, 26-year-old Annie Ryng [Ring?] and groom, 24-year-old Denis Murphy were both from Co. Cork.

We intend to put all the families from the 1901 Census up on the site, but if you are interested in finding out more you can see a full list of the occupants of Main Street in 1901 on the National Archives site here. We intend to expand our search to look at other streets in the town, as well as the 1911 Census to see what changes had taken place.

*Please see the comment of Kathryn Walsh below regarding an error in the census information which throws out some of the house numbers (Thanks Kathryn!)