Midleton and the 1867 Fenian Rising

In 1867 the Fenian movement attempted an armed rising in Ireland in an effort to wrest the country from British rule. However, poor planning and successful Government infiltration of the organisation meant that the effort was doomed to failure. The rising was sporadic and quickly fizzled out. However, the London Times of 8 March 1867 illustrates that Fenian members in Midleton were determined to take part:

A formidable insurrection has broken out in this county [Cork], and is, probably, simultaneous with a similar movement in other places. Last night, at about 11 o’clock, the telegraph wires belonging to the two companies having stations at Cork were cut, the Magnetic Company’s wires being destroyed a little way beyond Charleville, about 36 miles from Cork and the Electric Company at Midleton, whence they radiate to several quarters. At an apparently preconcerted hour bands of armed insurgents assembled at Midleton, at Carrignavar, in the neighbourhood of Cork, at Kilmallock, Knocklong, and Rathduff…

The rising began in Midleton- that is, the assembly there seems to have been the earliest. The Fenians collected on the fair green  to the number of about 50, and marched through the town in military order. They were all armed, and had haversacks of provisions. At the end of the town, near Copinger’s-bridge, they were met by an armed police patrol of four men. The Fenian leader called on the patrol to surrender, and the demand was followed up by a volley, by which one of the four constables were killed and another slightly wounded. The uninjured men returned the fire, with what effect is not known, and made their escape hastily into an adjoining house, whence they afterwards regained the barracks. The Fenians marched from Midleton to Castlemartyr, leaving the police barrack at the former town unmolested. On the route they were joined by several parties of armed men, and arrived in Castlemartyr with a force about 200 strong. Daly, the Fenian leader, drew up his men in front of the police-barrack, which had been closed and barricaded on their approach, and called on its occupants to surrender. The policemen, who did not exceed six or seven in number, replied by a well-directed fire, killing Daly and wounding several of his band. The remainder then retired in the direction of Killeagh, to which place small parties of men were seen making their way from Cloyne, Youghal and several other places during the night. 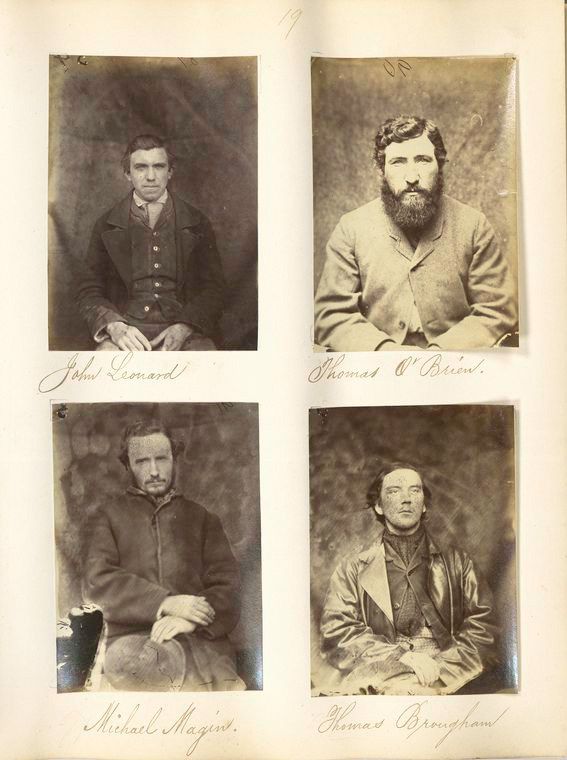 Mugshots of Fenians taken in Mountjoy Prison in 1866. The Fenians were some of the first people in Ireland to have mugshots taken, as it was a relatively new practice at the time (New York Public Library)

The Cork Examiner of 7 March 1867 added further detail regarding the particulars of the incident at the bridge in Midleton:

The precise circumstances of the occurrence in Midleton are these:- A few minutes before eleven o clock, the Fenians assembled in the Main-street of the town, as already stated, and after the interview with the gentleman who mistook them for police, they moved down to the bridge close by the National Bank and here they drew up on the left side of the approach to the bridge. The patrol, consisting of Acting Constables Greany, Sub-constables O Donnell, Sheedy, and O Brien, passed on towards the bridge, at the other side of the road. When they had passed slightly beyond the Fenians, they were challenged by, it is believed, Daly, their leader, and called upon to surrender in the name of the Irish Republic. The police were then close to Mr. Green’s gate, and the Fenians were but a few yards away from them, assembled four deep. When the police did not obey the call, Daly seized Sub-Constable O Donnell’s rifle, and presenting a revolver at his head, fired. O Donnell at the same time pushed Daly slightly from him, and thus caused the pistol ball to glance around the back of his head, the powder singeing his hair. At the same moment, the party of Fenians fired a volley. A ball entered Sub-Constable Sheedy’s breast, low down near the stomach on the right side, and after running a short distance up the chapel road, he fell and bled probably to death. The other policemen fled in the same direction, and O Donnell, who was wounded in the head, took shelter in a house. As the others fled, the Fenians fired after them, and the Acting-Constable had a number of extraordinary escapes. Bullets grazed the back of his hand, passed through his cap, touched his knee, and cut the edge of his ammunition pouch. He, with Sub-constable O Brien, got round by Mr. Green’s house, and having taken shelter there till morning, got back to the station, escorted by Mr. Green, who had great influence and popularity in the town. After Sheedy fell he was stripped of his rifle and accoutrements. Daly took Sub-constable O Donnell’s rifle with him. Greany and O Brien retained theirs. The gate and wall in front of Mr. Green’s residence were thickly marked with the volleys of bullets fired by the insurgents, and subsequently, a dozen revolver cartridges were found on the foot path there, as well as two large hand grenades with fuses attached. The cartridges were patent make, manufactured by Gladstone and Co. of London. It is also said that the first assembly of the Midleton Fenians was at the Cork road, where they were formed in three divisions, but being there surprised by the police they scattered and subsequently met at the house of a person of some position in the town, at the door of which a sentry was posted, and all persons entering closely scanned. Thence they are believed to have proceeded to the Bank Bridge. The police say they were only armed with pistols, but a gentleman who passed close to them, says that they had rifles and swords. After the encounter of the bridge, they are said to have gone by Ballinacurra towards Castlemartyr. The firing in Midleton is described as being as regular as that of disciplined troops. Another circumstance stated is that suspicious looking strangers wearing cloaks were seen in Midleton early in the evening, and they are believed to have come from the direction of Cork. Cars heavily laden are also known to have passed through the town about one o clock. Constable Greany found, near the bridge, a pike ten feet long, this morning.

2 thoughts on “Midleton and the 1867 Fenian Rising”